Zaanse … or is it a Spanish sconce?

The Zaanse Schans takes its name from an earthen sconce, a fortification from the Eighty Years’ War (the uprising against Spanish rule). In the Zaan district, there were probably 13 of these types of sconce in the 16th century. In 1574, the Kalver-Schans was situated right next to the current Zaanse Schans, across the road. It was the largest one in the region and the only Zaanse Schans never conquered by the Spaniards!

Today nothing is left of the old sconce. However, on an aerial photo from 1944 a ramp contour is clearly visible as soil discolouration in the pasture. The most northerly point reached up to the beginning of the Kalverringdijk in the Zaanse Schans.

Zaanse Schans etymology
Around 1961, the name Zaanse Schans was chosen for the reconstruction of a typical Zaan district neighbourhood. The term “sconce” (or “schans”) is thereby intended metaphorically: the location is a sanctuary for traditional Zaan district carpentry, which was threatened after the Second World War. 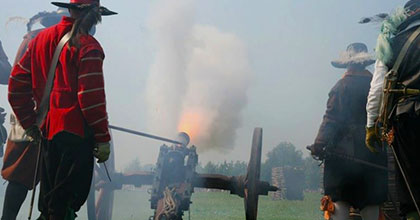 Travel back in time with a visit to the Zaanse Schans

Learn about the Spanish history of Zaandam. The Zaanse Schans is the most fun day out in North Holland Want to know which sites are open during your visit? Plan your trip in advance.